Today the Crime Victims Center reminds you to wear

January is Stalking Awareness Month. Tune in this 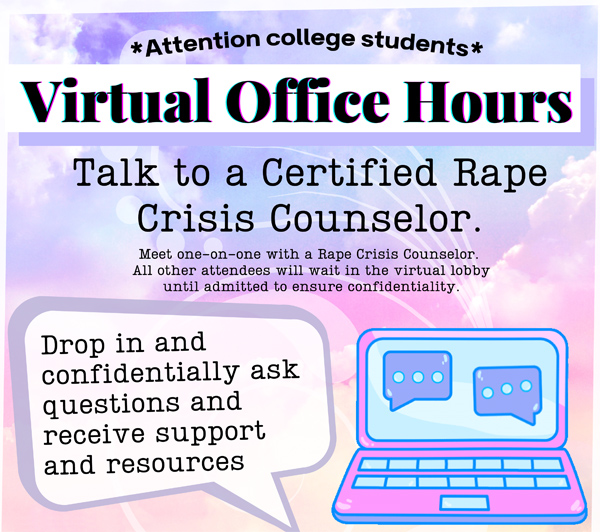 Beyond Physical Abuse: A Conversation on Domestic Violence - On December 1st, 2021 was a virtual panel that Crime Victims Center staff were invited to participate in as well as help plan. This was an initiative as part of the Suffolk County Community College Take Back the Night Coalition of which the Crime Victims Center is an active partner. The panel discussion helped to illustrate the various ways domestic violence or relationship violence can manifest beyond physical abuse. The panel included a discussion on economic and financial abuse, emotional and psychological abuse, as well as cyber abuse. During the panel we were able to speak about the various resources available for victims/survivors as well as ways to support a victim/survivor.

CNN - Terrifying being a woman after dark: Women around the world speak up on gender-based violence
After incidents of gender-based violence, the onus is usually put on women to change their behaviors to stay safe. The Global Brief with Bianca Nobilo conducted a social media call to ask women about their experiences. We received responses from Kenya to the Netherlands to Sri Lanka to the US, with the refrain eerily similar. Their responses show just how focused the conversation is towards women, rather than the perpetrator.

Coercion, Consent and Sexual Violence | Dr. Felicia Kimbrough | TEDxSIUC (8:17)
Dr. Felicia Kimbrough, a Nurse Practitioner in an Illinois Health Care Center, speaks of the lack of reoccurring education about consent and sexual violence in America. There is a trend of adults and parents refusing to speak about these topics with their children, despite the fact that technology has given children increased access to pornography. This Ted Talk educates listeners about what consent is, and how coercing someone into sexual activities is sexual violence. This talk encourages students to engage in discussions about sexual violence throughout their lives in order to promote a cultural change.
Original Video

What If Bears Killed One In Five People?
Guys, this angry, hungry bear in our house is a big problem.
You wouldn't put up with that. So don't put up with this. 1 in 5 women will be sexually assaulted by the time they finish college. Do something about it. Take the pledge at itsonus.org
Original Video

Intervene
Produced by the Skorton Center for Health Initiatives, a unit within Cornell Health at Cornell University, in collaboration with the Cornell Interactive Theater Ensemble, Intervene uses brief scenarios to demonstrate ways in which student bystanders can successfully intervene in problematic situations. Seven different situations are addressed, including sexual assault, sexual harassment, intimate partner violence (emotional abuse), hazing, an alcohol emergency, emotional distress, and bias. The video is intended to be used with students who already have some exposure to the college social environment, and is not intended to be used during new student orientation. A facilitator discussion guide and the results of a randomized control trial evaluation are also provided on the program web site.

Going to College: What Families Need to Know About Sexual Assault and Safety on Campus
A document created by the National Sexual Violence Resource Center that offers guidance to help parents address key topics relating to sexual assault and safety before their child leaves for college. Teaching young adults about this prevalent public health issue will better prepare them to deal with this issue in an informed way.

Truth about False Accusations Visualization
A graphic depicting the truth about the number of individuals who are falsely accused of rape.

What is Stalking?
A document provided by the National Coalition Against Domestic Violence covering facts about stalking and what you can do to help.

Students’ Bill of Rights
The rights that are held by all students in accordance with “Enough is Enough” legislation.